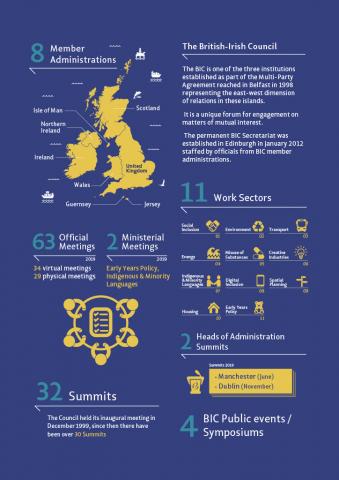 Formation of the council

On Friday, 10 April 1998, after two years of intensive negotiations, the British and Irish governments and the political parties in Northern Ireland approved a comprehensive political agreement - the Agreement reached in the Multi-Party Negotiations, also known as the Belfast or Good Friday Agreement.

The Council’s objectives are wide-ranging. It was established to:

Delegations widely welcomed the establishment of the Council at the Council’s inaugural meeting in December 1999.

The formal purpose of the Council as outlined in strand 3 of the agreement is "to promote the harmonious and mutually beneficial development of the totality of relationships among the peoples of these islands... the BIC will exchange information, discuss, consult and use best endeavours to reach agreement on co-operation on matters of mutual interest within the competence of the relevant administrations".

Operation of the council

The Council normally operates by consensus, and it aims to provide a forum where members can have an opportunity to consult, co-operate and exchange views with a view to agreeing common policies or common actions in areas of mutual interest for the benefit of all.

Membership of the Council comprises representatives of the Irish and UK governments, Northern Ireland Executive, Scotland, Wales, Guernsey, the Isle of Man, and Jersey.

The Council is unique in that it is the only international forum in which these eight  members participate. All members act in accordance with their own democratic procedures and remain accountable to their respective elected institutions.

The Council meets primarily in two formats – bi-annual summit meetings with Heads of Administrations and work sector meetings of Ministers and meetings of officials.

Further details about meetings are available in the communiqués which the Council issues after summits and ministerial meetings.
The Council also hosts conferences, seminars and study visits for experts in particular fields, including for example environmental issues and social inclusion.

Find out more about the work of the Council in our factsheet and infographic.